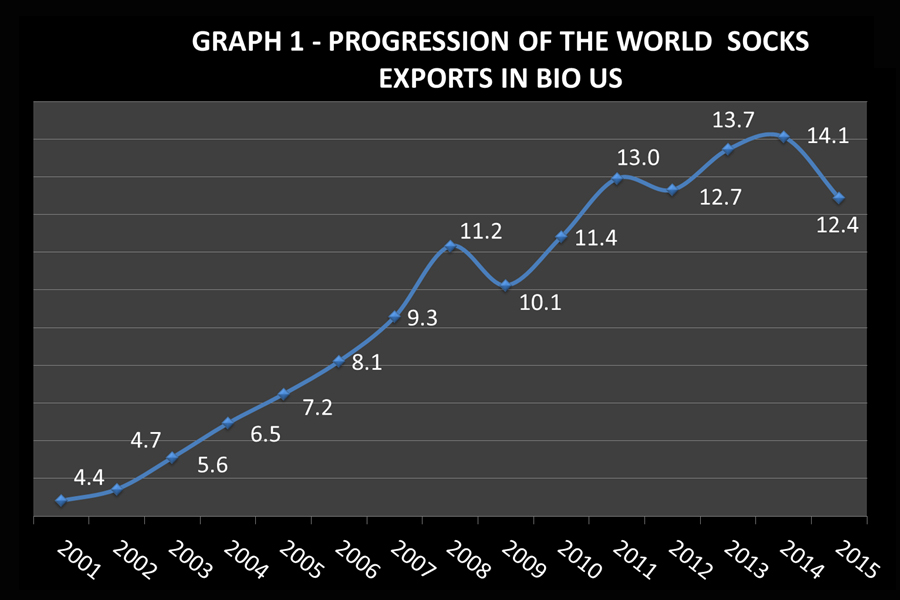 Based on the figures obtained from the United Nations COMTRADE in USD terms, the world sock exports have increased rapidly over the years, as you can see in Graph 1. Unfortunately, in 2015, the global socks trade faced a second time steep decline after the year 2008. World sock exports in the year 2015 have declined to $ 12.4 billion USD from $ 14.1 billion in 2014. This drop represents a much higher decline of 12% or $ 1.7 billion usd compared to 9.8% seen in 2008.

How can we explain the drop of the socks exports in 2015? I think the depreciation of the euro by 16% against the US dollar in 2015 was one of the major reasons. The possibility that European countries with a 45.9% share of total world socks imports are conducting their trade in Euro-terms may have caused the decrease in the total figure that calculated on the basis of American dollars. The Fed‘s hinting about reducing QE, which started in 2014, a weak global economy and the collapsing price of crude oil has also created an infrastructure for contraction in world socks trade in the year 2015.

Although the negative contribution of the euro towards the US dollar has been halted since the end of the year 2015, the fact remains that the US central bank is still in the spotlight as a factor that reduces the likelihood that the World Socks business will grow in the next few years. In addition, the ongoing economic problems in the European region, the largest importer in the world, are at the forefront of the reasons that prevent us from being hopeful in the near future.